Discover one of Britain’s best-loved cities - York. A cultural and historical visit in June

Discover York - one of Britain’s best-loved cities - on a cultural and historical visit in June 2023.

York is a cathedral city located where the rivers Ouse and Foss merge and it is the UK’s first and only UNESCO Creative City of Media Arts. Few cities can rival the sheer charm of York. It’s like stepping back into medieval times, with its winding cobbled streets, magnificent cathedral, classic shop fronts, and dramatic stone walls surrounding the city.

Nearly all the main York attractions are within walking distance of one another. York’s prettiest street, the Shambles won the title of most picturesque street in Britain in the Google Street View Awards. York city centre isn’t only a treasure trove for shopping, culture, and the arts. It is also famous as Europe’s most-haunted city and the Golden Fleece is its most phantom-infested pub where, legend has it, 15 ghosts reside.

As part of our program, we are offering three day trips. First we will visit the seaside village of Whitby, which served as inspiration for the Dracula books. Here you will also be able to indulge in some of the world’s best fish and chips!

Our second excursion is to Haworth via an old-fashioned steam train. In Haworth you will have the opportunity to explore the town where the Brontë sisters lived between 1820 and 1855.

The third trip will be to the fascinating stately home Castle Howard, 15 miles north of York. It is known as one of England’s finest historic houses and gardens and was built 1701-1811 on the site of a former castle.

Naturally there will be plenty of time to explore York on your own as well. From its excellent restaurants in the Shambles to the magnificent Minster,York is a place where foodies, history buffs and those who just enjoy the world’s best scones and tea will all find something to enjoy!

All important information regarding transportation, flights and accommodations will be provided by your travel guides during the Information Evening.

Day 1: Saturday, June 24 Arrival day in York.
Our first evening. After we meet at the hotel for a welcome drink we will enjoy a leisurely stroll to the Shambles for a lovely dinner.

Day 2: Sunday, June 25
A meander along the medieval stone wall and an exploration of York’s secret passageways to find the medieval world hidden in plain sight is planned for the morning. We will finish the afternoon together at Betty's Café. The rest of the day and evening you will be free to explore on your own.

Day 3: Monday, June 26
Today’s outing is to the North Sea harbour town of Whitby, where you will be able to visit the architectural remains of Whitby Abbey which served as the inspiration for the Dracula books. After a day of sightseeing you will be able to indulge in some of the world’s best fish and chips before we head back to York!

Day 4: Tuesday June 27
Today we will take an old-fashioned steam train to the village of Haworth where the Brontë sisters lived between 1820 and 1855. Some of their most famous books were written at the Parsonage (now the Brontë Parsonage Museum). The wild moorland landscape around Haworth was a rich source of inspiration for them.
Rounding out our literary foray will be a surprise encounter with a prominent local literary figure!

Day 5: Wednesday June 28
You may enjoy an outing to one of the grandest estates in England, Castle Howard used as the Duke of Hastings’s estate in the Bridgerton series. In the evening we will come together for an after-dark Ghost walk, followed by dinner at one of York’s many excellent restaurants.

Day 6 Thursday, June 29
The choice is yours! A full day for shopping and exploring York on your own as well as visiting one or more of York’s museums. The Yorkshire Museum, which has some of the finest archaeological and geological collections in Europe, is one popular option.

This trip to York is organised by the VHS Braunschweig and it will offer participants a unique opportunity to explore the history, the culture, the literature and the people with an experienced guide so you can rest assured that you will have all the insider tips on the city’s many hidden gems.

We recommend a B1+ level of English for full enjoyment of this trip. 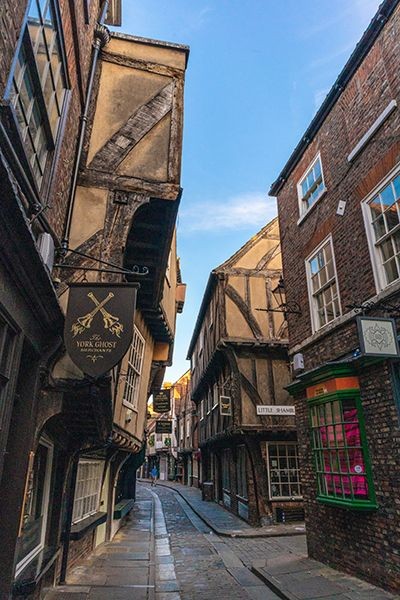